At Humphry Davy we are keen to ensure that no child misses learning following periods of absence from school and we recognise how the parent/school partnership is essential in achieving this. Good attendance is crucial for success in school and for your child to achieve their potential.

Research shows the negative impact of attendance on achievement is clear and is illustrated by the missed learning information below.  Please note the steep decline in access to learning opportunities when attendance drops below 91%.

We want the young people in our care to succeed and this is why our expectation for all students is to attain an attendance figure of least 96% or higher. 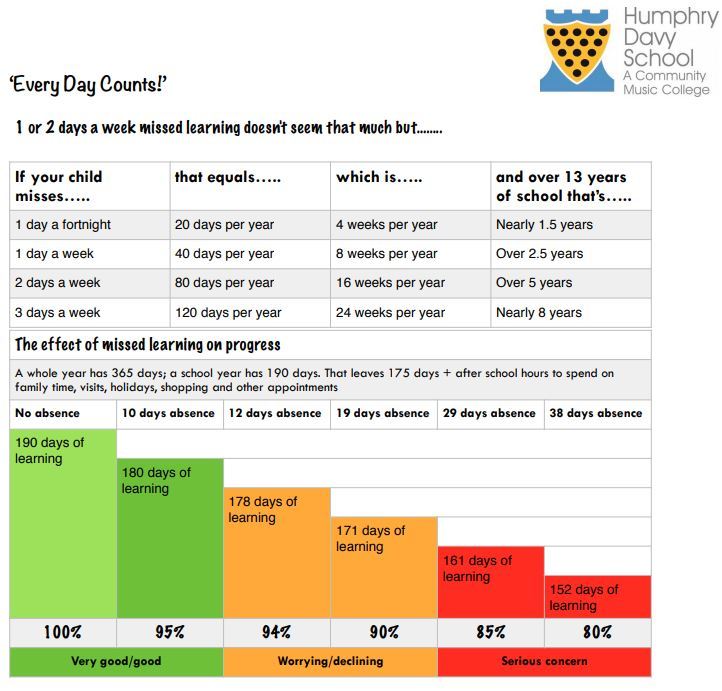 We recognise how much easier it is for parents/carers to have an overview of how we will be supporting and monitoring attendance.

Listed below are the ways in which working together we can ensure that no child falls behind due to missed learning.

If a child has a genuine reason to be absent from school parents or carers must:

If a child is absent from school we will:

In the case of lack of contact from parents/carers and consistent absence we would consider this a safeguarding matter as we feel a child may be at risk of harm if they do not attend school regularly. To ensure safety, we may conduct house visits if there is any cause for concern and we have not been in contact with parents/carers.

Additionally, the school may request advice from the Children Missing Education Service (CMES) in line with the schools safeguarding procedures in cases when we are unable to contact parents/carers or when we feel there is a pattern of poor attendance which is a cause for concern.

We do understand, that exceptional circumstances may occur and parents/carers are welcome to complete a leave of absence request form at these times by emailing attendance@humphry-davy.cornwall.sch.uk. Once received we will discuss with parents/carers on an individual basis.

However, further to the recent decision from the Supreme Court, in the case of Platt v Isle of Wight council, which clarified the law on unauthorised leave, including taking school-age pupils out of school for holidays in term time. We will be clear that holidays taken during term time will not be authorised and may incur a penalty notice.

Penalty Notices can be issued in cases where a pupil of compulsory school age has been absent and the absence has not been authorised by the school or where the pupil has persistently arrived late after the register has been closed.

In these cases, we may refer the matter to Cornwall Council who, as the issuing officer, may decide to take legal action against you. A penalty notice can be issued under Section 444A and 444B of the Education Act 1996. This carries a fine of £60 if paid within 21 days or £120 if paid after this but within 28 days. Fines are issued per parent/carer, per child. Failure to pay the penalty notice may result in Court action. Persistent absences not authorised by the school may result in a prosecution in the Magistrates Court, leading to fines up to £2,500 and/or custodial sentences.

Schools are obliged to act within the law and there is further information on this below.

The Supreme Court reached a decision in the case of Platt v Isle of Wight Council, which clarified the law on unauthorised leave, including holidays, during term time, that the parents of children of compulsory school age are required to ensure that their children attend school on a regular basis. The Supreme Court made it clear that attending school ‘regularly’ means that the children must attend school on each day that they are required to do so. As such, the parents of any child, who is absent from school without authorisation for any length of time, are likely to be considered as committing an offence under s444 of the Education Act 1996.

Head Teachers retain the ability to authorise leave in accordance with the Education (Pupil Registration) (England) Regulations 2006. However, when considering such requests for a leave of absence, the school is obliged to act within the law. Head Teachers may not grant any leave of absence during term time unless there are exceptional circumstances relating to the application. If the leave is granted, Head Teachers are able to determine the number of school days a child can be absent for.

It is for the Head Teacher to decide what is ‘exceptional’ and it is at their discretion if the circumstances warrant the leave to be granted. The school can only consider Leave of Absence requests which are made by the ‘resident’ parent.

Each application for a leave of absence will be considered on a case by case basis and on its own merits.

Where applications for leave of absence are made in advance and refused, the child will be required to be in school on the dates set out in the application. If the child is absent during that period, it will be recorded as an unauthorised absence, which may result in legal action being taken against the parent(s), by way of a Fixed Penalty Notice.

Failure to make an application for leave in advance may also result in a Fixed Penalty Notice being issued to the parent(s).

It is important to note: Fixed Penalty Notices are issued to each parent, of each absent child, (for example two children and two parents, means each parent may receive two invoices for the amount of £120 each, totalling £240 for both children. However, this amount will be reduced to £60 per child if paid within 21 days).

We will inform both parents of the outcome for requests for leave of absence.

Where a Fixed Penalty Notice is not paid within the required timeframe as set out on the notice, the matter will be referred to Cornwall County Council’s Legal Services to consider instigating criminal proceedings under S444 Education Act 1996.

Parents/Carers should endeavour to make non-urgent medical/dentist appointments outside the school day. However, if there is an ongoing reason why parents have appointments that are necessary to meet, or individual events/fixtures which your child may be requested to attend - we would be grateful if parents could complete a leave of absence form, which can be requested via; attendance@humphry-davy.cornwall.sch.uk. This will allow us to plan to support any missed learning and discuss with parents on an individual basis.

School starts promptly at 8.40am with a mentor period. This is an important registration point which allows us to ensure all children who should be in school are present and accounted for. Punctuality to mentor at 8.40am ensures the day gets off to a good start and allows students to access our mentoring programme, which is carefully planned and delivered daily.

What happens if a student is late?

If a student is late to school in the morning with no genuine reason, or parental communication they will  incur a consequence for being late. Consequences range from school detentions to possible penalty notice (see above) for persistent lateness.

How to Find Us